Free agent Stephen Paea signed with the Washington Redskins after completing a personal season best of 6.0 sacks, 11 quarterback hits, and 31 quarterback hurries for the Chicago Bears in 2014. Paea chose the Redskins over Dallas, Detroit, Denver, and Tampa Bay, in order to be a part of the Redskins’ new 3-4/4-3 hybrid defense often referred to as the 3-4 Under. This breakdown will look at how Paea fits into the Redskins new defense under Joe Barry and how he should be utilized after signing a 4 year – $21 million contract with $15 million guaranteed.

First let’s take a look at the 3-4 Under from a conceptual standpoint. The 3-4 Under is known as a “hybrid” defense because it combines elements of the 3-4 Base defense (or Okie defense) with some of the one-gap principles of the base 4-3 Defense. In a traditional 3-4 Okie defense, the three defensive lineman are responsible for read-and-react roles since they are playing two gaps on each side of their respective offensive lineman. In order to field a top tier defense, a defensive coordinator requires larger, stouter defensive lineman to clog the running lanes to make sure the outside linebackers are free to get penetration into the backfield to put pressure on the opposing quarterbacks. 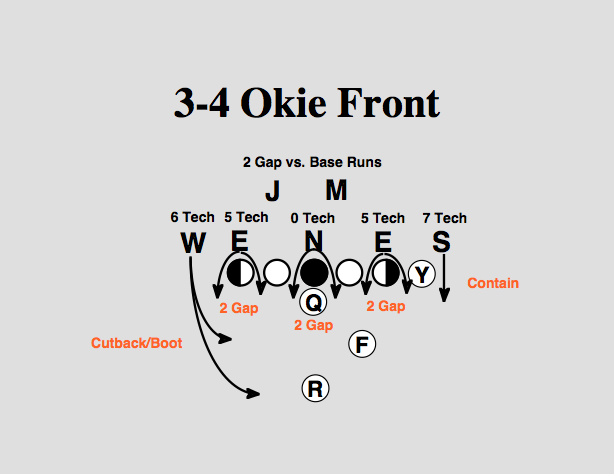 Since the 3-4 Under combines one-gap principles of the base 4-3 defense, it does not require the defensive lineman to be big and as stout against the run. Instead it relies on the defensive lineman to be more athletic to burst through their assigned gaps to get upfield and provide pressure against the opposing quarterback. It’s a much more aggressive defense than your traditional 3-4 Okie defense and requires different player skill-sets to be run successfully. 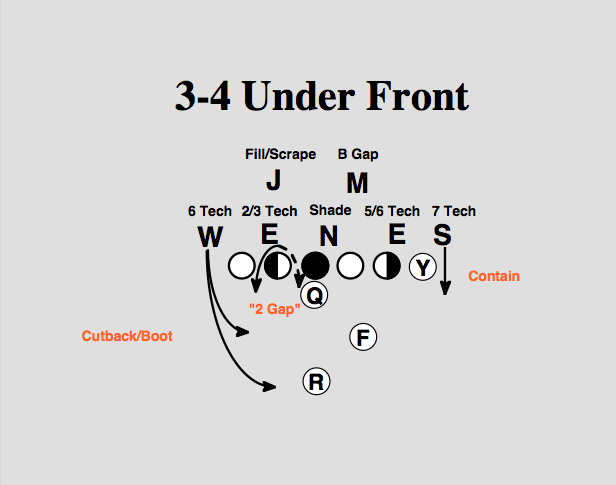 Here are the roles of the defensive lineman compared back to back:

As you can see from the above roles, there are clear differences between the 3-4 Okie and the 3-4 Under which require different player skill-sets to fill the defense.

According to Paea, “the Redskins will utilize him as an end in the base 3-4 while moving him inside on pass rushing downs.” Looking at this description, it looks like Stephen Paea is going to play the Corey Liuget-role of the San Diego Chargers. Joe Barry has familiarity with this role and the 3-4 Under scheme due to his tenure as linebackers coach with the Chargers underneath defensive coordinator John Pagano, who learned it from Wade Phillips. Here are some of DE94 Liuget’s plays on various downs to get a feel for his full role:

Play 1 – Liuget rushes 3-tech from the weakside defensive end position and does a great hump move featured in this article to get sack.

Play 2 – Liuget rushes 3-tech from the weakside defensive end position. He is playing the 2-gap role reading the play, then he disengages from the block to get the sack.

Play 3 – Liuget rushes from the 0-tech lining up as the nose tackle directly over the center. Liuget attempts to do a club-swim move but gets punched by the center and right guard double-teaming to stop him from pursuing the quarterback.

So now the next logical question is: Can Stephen Paea play the same role?
Size: Paea and Liuget are almost identical in size. Liuget is 6’2″ 300 lbs, while Paea stands at 6’1″ 300 lbs.
Ability: Both are quick off of the snap, both have solid bull-rushes developed from their college days, and both are surprisngly athetic for their size.

From a physical make-up the answer is yes. Here are some plays made by Paea while he was still with the Bears:

Play 4 – Paea lines up from the weakside 3-tech defensive tackle position and does the same hump move back inside to penetrate into the pocket. The center picks up Paea and forces him out of the play away from the quarterback, but anytime you can beat a guard one-on-one you allow another one of your defensive lineman the ability to make a play as well.

Play 5 – Paea runs the same exact hump move from the weakside 3-tech defensive tackle position. This time the center doesn’t help and Paea is able to place a good hit on the quarterback and stopping him from throwing the ball down the field.

Play 6 – Paea shows his burst off of the line of scrimmage to explode towards the weakside A-gap then clubs the center out of his path to get to the quarterback.

Play 7 – Paea lines up as the 1-tech nose tackle and takes on a double-team consisting of the center and the right guard.

Overall, the Redskins signed a quality, young defensive lineman in Stephen Paea to help form the foundation of the Redskins’ new 3-4 Under coached by Joe Barry. Just like Corey Liuget in San Diego, Stephen Paea’s strength at the point of attack to hold the ground will be important as he rushes from the weakside defensive end position as a 2-gap defender on 1st and 2nd downs, while being a nose tackle on 3rd down situations to help the pass rush.