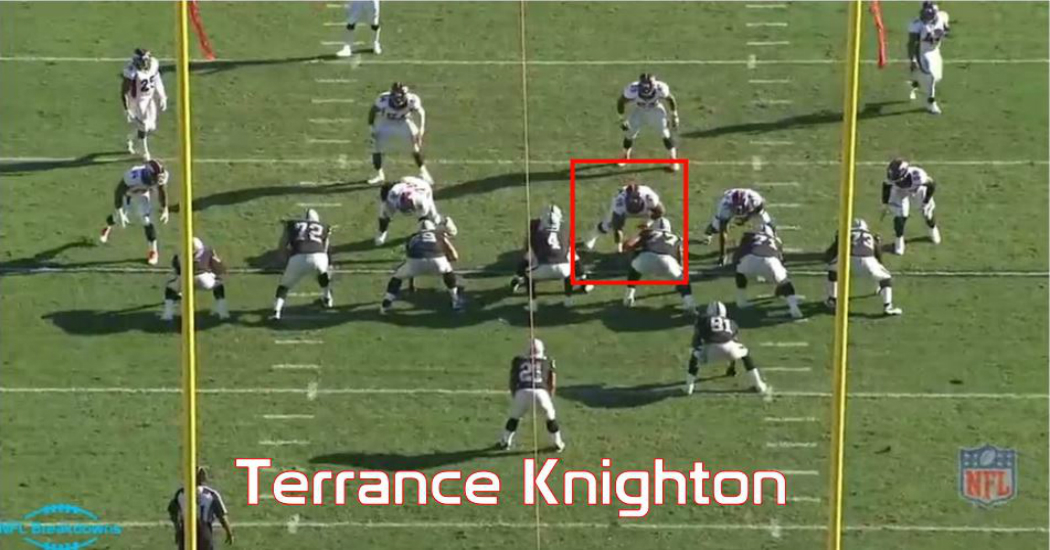 Terrance Knighton signed with the Redskins after visiting a number of teams hoping to find a large multi-year contract after a record season for the Denver Broncos. This marks the third defensive lineman the Redskins signed this free agency including Ricky Jean-Francois and Stephen Paea earlier this week. In this breakdown we’ll see how Terrance Knighton fits into the Redskins’ new 3-4 Under led by defensive coordinator Joe Barry.

Earlier this week we took a deeper a look into the 3-4 Under the Redskins will employ after they signed Stephen Paea to a 4 yr – $21 mil contract. Click here for that full breakdown. To re-iterate, in a traditional 3-4 Okie defense the nose tackle and the defensive ends play two gaps. In the 3-4 Under, the nose tackle and the strongside defensive end in 5-technique play one-gap to aggressively penetrate the backfield, while the other defensive end holds two gaps on the weakside of the formation. Due to this change in responsibilities, the nose tackle position requires a different skill-set and ideal body size than your prototypical 3-4 Okie defense. Typically, Wade Phillips uses a nose tackle that stands around 6’3″ 300 lbs like Jay Ratliff when he coached the Cowboys. This is due to Phillips requiring quickness to break through the gap and split the blockers.

So what gives? If the Redskins are lining up in a 3-4 Under where they need the nose tackle to shoot the strongside A-gap, why did they sign Terrance “Pot Roast” Knighton who is listed at 6’3″ 335 lbs and is realistically larger than that now? This can be answered in two parts. The first has to do with his contact value, and the second has to do with his ability as more than a run-stuffing nose tackle.

First, it was reported that Knighton was looking for an $8 million per year contract after his fantastic performance for the Broncos defense in which he was ranked the #8 defensive tackle against the run by Pro Football Focus. The Broncos hired Wade Phillips, yet they weren’t ready to pay him that kind of money so he left. Later it was reported that teams were concerned about him being out-of-shape. These claims actually aren’t unwarranted as Knighton racked up $300,000 in weight-related fines last season.

Additionally, it seems like this is a systemic issue for Terrance “Pot Roast” Knighton seeing as earlier in his career when he still played for the Jaguars he came into training camp weighing well over 360 lbs and slimmed down 20 lbs to help with his explosiveness. This is a huge concern and needs to be monitored as many Redskins fans should be wary of another Albert Haynesworth-situation. Due to these concerns Knighton ended up signing a one-year “prove-it” contract worth only $4 million. That’s insanely cheap for the blue-chip nose tackle from Temple University.

The next thing we need to look at his is ability and to do that we’ll take a look at some of his plays from the previous season with the Broncos to see how he fits in the Redskins new scheme:

Play 1 – Knighton lines up in the 2i-tech position across the inside shoulder of Oakland’s right guard Howard. Oakland runs Offset-I Power Right using the left guard and the tight end to lead block. RB21 Maurice Jones-Drew reads the blockers and follows them up through the hole created by the pulling left guard.

Knighton initially gets forced backwards by a great initial push by RG77 Howard who beats Knighton off of the snap. Knighton sheds his block seals the hole gap bringing down Jones-Drew for a minimal gain on the play. Although, Knighton didn’t dominate this interaction from the start, he clearly has enough force to make up for it even after an incredible push by Howard to push the large nose tackle backwards.

Play 2 – In this play, Knighton is playing as a traditional two-gap defender holding the point of attack as the left guard attempts to block him out of the play. Instead, Knighton holds the left guard at bay and takes down RB26 Lamar Miller before he can escape into the second level.

Play 3 – Knighton takes on a double team of LT74 Fox and LG67 Colledge and is able to use his strength to hold them back while making a play on the ballcarrier.

Play 4 – Knighton lines up in the strongside A-gap out of the 1-tech. This is an interesting run design by the Chiefs in pistol formation as C61 Hudson fakes like he is going to block Knighton but insead he disengages to block LB53 Johnson. FB42 Sherman “wham” blocks Knighton across the formation almost knocking him off balance, but Knighton is able to control his fall and help bring down Charles for a minimal gain on the play. The main reason I showed this play was to show Knighton shooting the gap with a beautifully executed club-swim move in the 3-4 Eagle front.

Play 5 – Here Knighton gets a deep 12 yard sack on Tannehill using his violent hands to keep Miami’s left guard from getting a firm block on him inside his shoulder pads.

Play 6 – Knighton lines up in the 1-tech on the strongside shoulder of the center. Knighton starts his rush attempting to split the A-gap between the center and the right guard. Oakland’s center Wisniewski kick-steps out to seal the gap, but Knighton places his hands between the shoulder pads of him, and bulljerks him down to the ground displaying his strength and ability to imbalance the opposing blocker. Knighton completes his rush by swimming over the falling center and delivers a blow on the quarterback as he is releasing the ball. Although, Knighton doesn’t get the sack, this is still a great move to penetrate the pocket all set up by good hand placement and a firm grab to remove the defender.

Overall, Knighton is a great value signing for the Redskins at only $4 million, but his scheme fit is questionable currently based on his skill-set. Knighton is a great 3-4 Okie two-gap nose tackle, and will definitely be an immediate upgrade to the Redskins run-stopping abilities. However, the main point of the 3-4 Under is through quick penetration into the backfield. The interesting thing about Knighton is that during his time at Temple is that he showed an ability to split gaps as a one-gap defender. More recently in the NFL, he gained some weight, but still flashed some residual quickness from the film I’ve studied. Moving forward it would not surprise me at all if the Redskins included a weight loss-clause in his contract to get him back in the 330’s for next season to increase his first step quickness off of the snap.