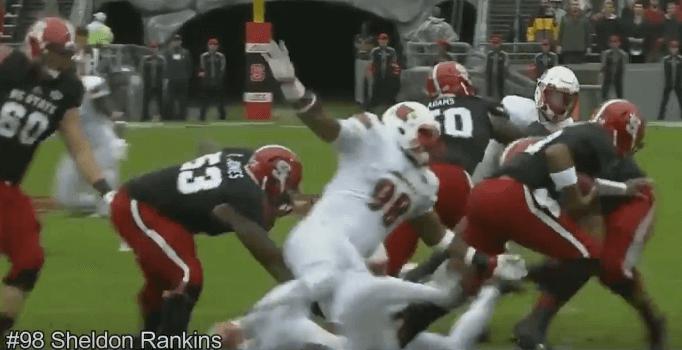 Sheldon Rankins was a three-star recruit from Eastside HS in Covington, Georgia. Rivals ranked him as the 32nd strongside defensive end in the 2012 class. Rankins was recruited by Mississippi State, Nebraska, and Wake Forest, but decided to play for Louisville. He enters the 2016 NFL Draft as one of the top interior defensive line prospects.

Rankins is a short, stout defensive lineman with solid length for his size. He displays a good burst off the line of scrimmage and he gives excellent effort in pursuit chasing down ball carriers. He is a natural in space and has good hip flexibility. This makes him an excellent candidate to run stunts with a creative defensive coordinator.

The main issue that I noticed consistently throughout his tape was that he was always the last one to move after the snap.

Based on his size and skill-set, Rankins projects best as a one-gap interior defensive lineman in the NFL. In order to be effective in the NFL, he absolutely needs to time the snap better. Hopefully, it’s correctable.

Article continues on the next page looking at his pass rush.